From the origins of our name, to the stages on which we have performed, the 'Asolo' story is rich in history –  both in our community and abroad. But Theatre by its very nature is here one moment and gone the next. It is for that beautiful, ephemeral reason that we must make an extra effort to capture and record the work of so many artists and community members that have helped Asolo Rep thrive through the years.

The name ‘Asolo’ comes to us from Asolo, Italy, a beautiful town tucked in the hills of the northern countryside. There, a lovely 18th-century theatre, caught the eye of Everett “Chick” Austin, the first Director of the John and Mable Ringling Museum of Art. He acquired the theatre’s interior for the museum’s collection in 1949. In this little jewel of a theatre, a fledgling acting company, founded by faculty of Florida State University (FSU), began performing a summer series of plays and operas, first as the Asolo Theatre Festival and later as the Asolo Theatre Company.

Over time, the company grew from a seasonal festival into a year-round operation and was recognized as the first State Theatre of Florida, later becoming a founding member of the prestigious League of Resident Theatres (LORT). In 1973, the theatre officially partnered with the FSU School of Theatre to mentor the actors in its MFA program – a relationship which became the highly acclaimed FSU/Asolo Conservatory for Actor Training.

The acting company and its audiences eventually outgrew the Ringling's Historic Asolo Theater, and the company moved into its current home within the FSU Center for the Performing Arts, where it has enjoyed notable success.

Below is a journey through the 60 plus years of Asolo Repertory Theatre’s history. While it is impossible to capture all the miraculous moments, we hope seeing just these few will begin to give the impression of a community deeply committed to the transformative power of theatre and a theatre that delivers just that. 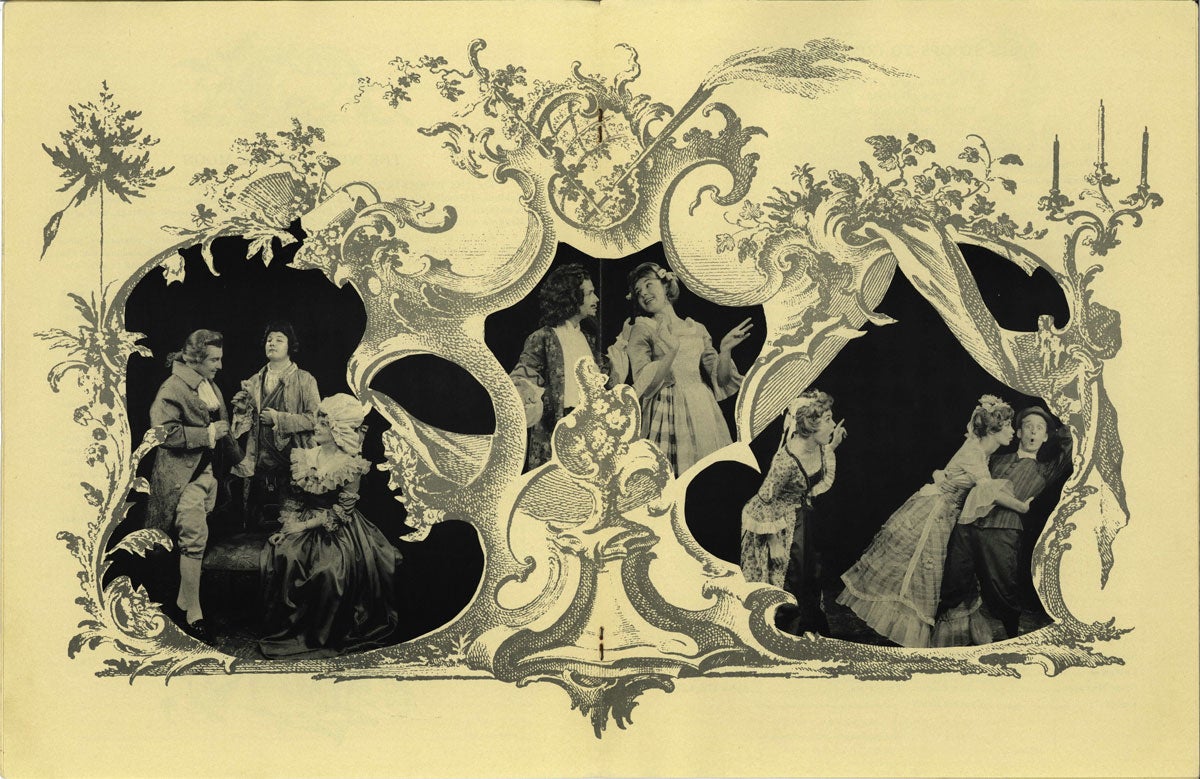 1960 - Faculty of Florida State University start a summer acting company in Sarasota, which performs in the Ringling Museum's Historic Asolo Theater and soon becomes known as the Asolo Theatre Festival. The Festival was recognized for its strong performers, historical authenticity and unique marriage of content and setting. 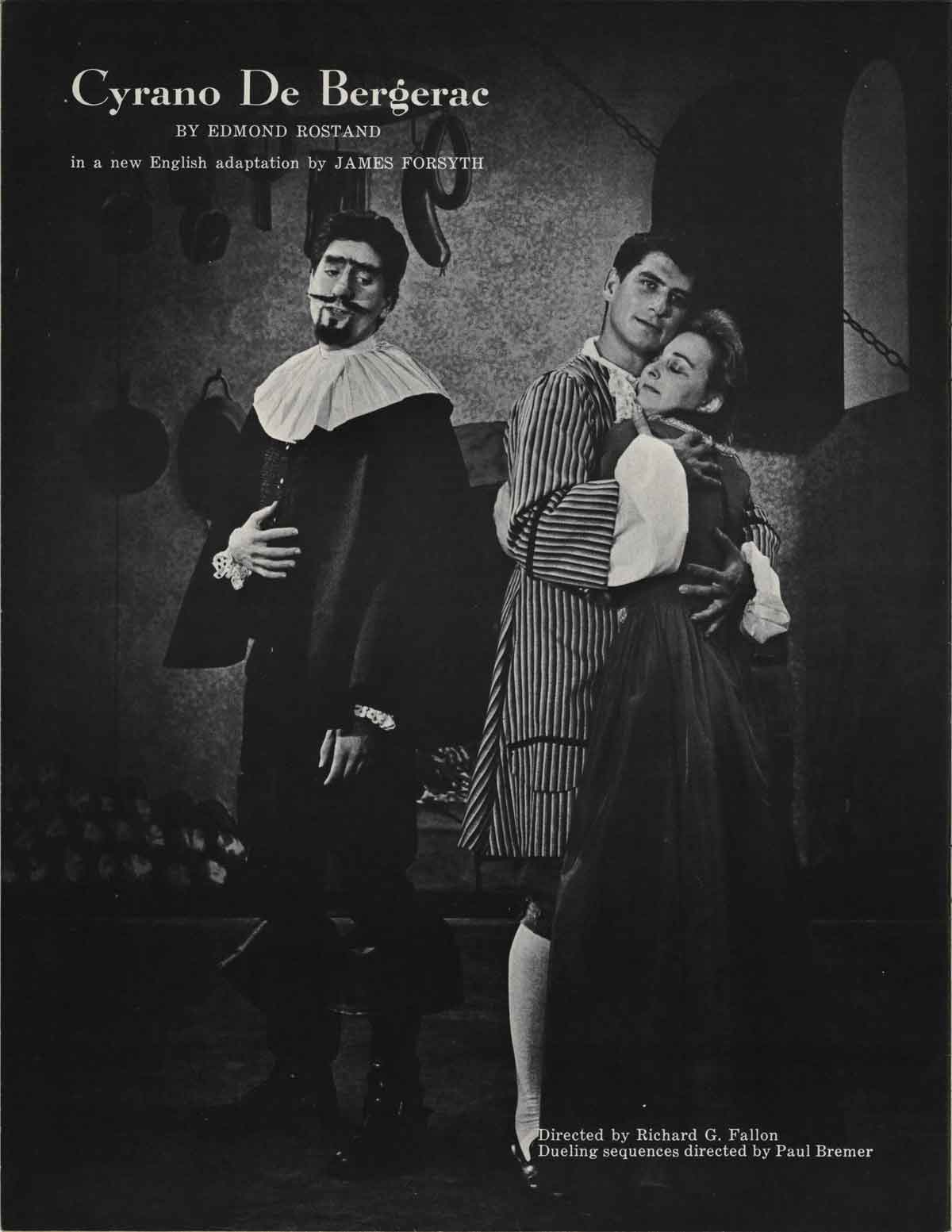 1962 - The Festival expands its schedule to 50 performances of 18th century comedies and operas per season. This requires the organization to maintain both a company of actors as well as a company of singers, a costly proposition.

1963 - The Festival’s repertory broadens to include works from all historic periods with Shakespeare’s Taming of the Shrew and a late 19th century play, Cyrano de Bergerac by Edmond Rostand. Newly appointed as General Director, Richard G. Fallon sets out to make the Festival a stable, high quality professional repertory company.

1964 – Critic of international stature, Howard Hewes of The Saturday Review, boosts the Festival’s national profile by writing in one of his reviews “There are two Theaters in North America worth the price of admission simply to enter and be seated… the Stratford, Ontario Festival Theatre, and the Asolo.”

1965 - By designation of the state legislature, Asolo Theatre Festival becomes the first State Theatre of Florida. With this honor and financial investment from the federal government to launch a touring company, the Festival looks to expand its operations. 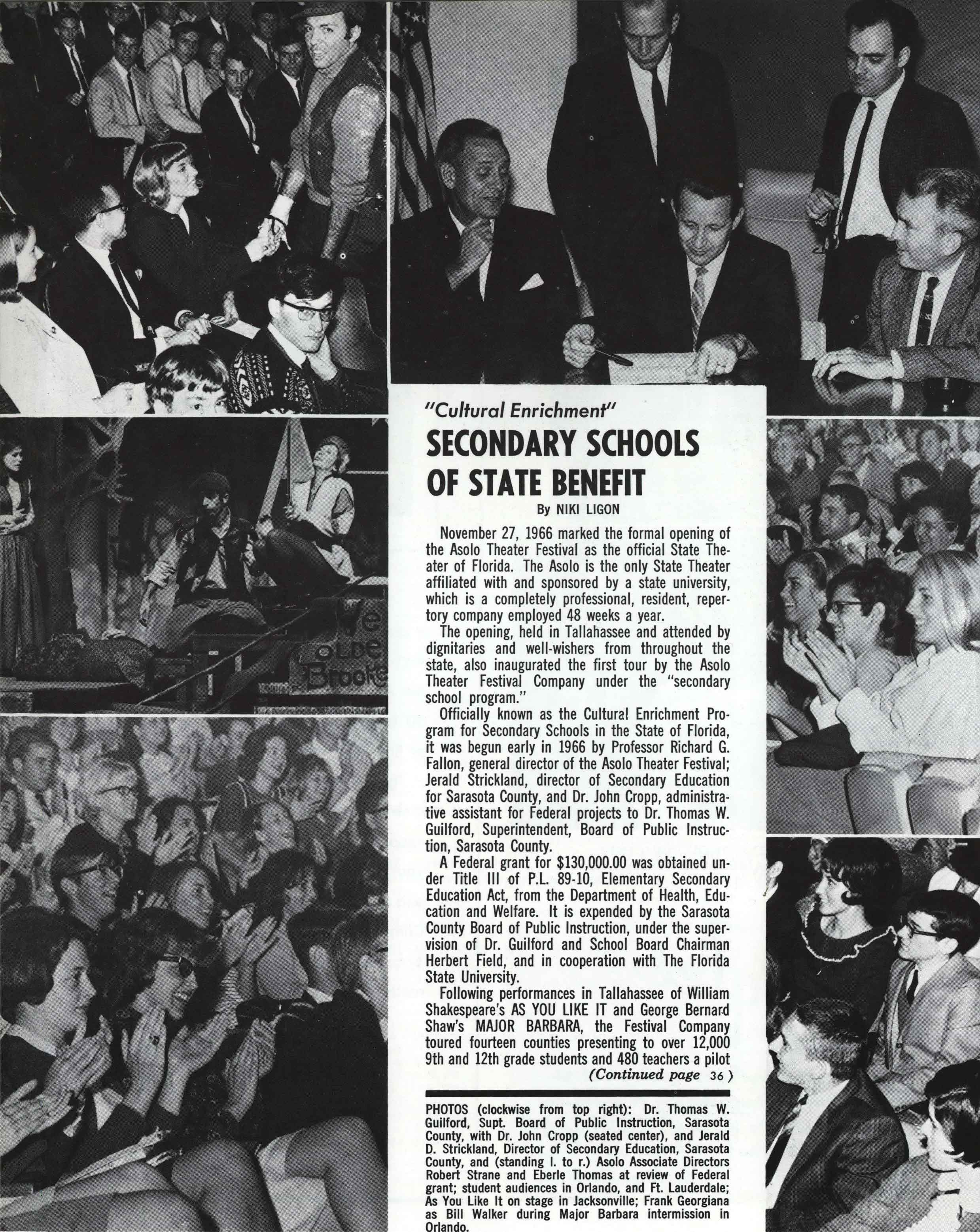 1966 - Asolo Theatre Festival becomes a year-round professional theatre and a member of the prestigious League of Resident Theatres (LORT), now known as the Asolo Theatre Company. This increases the production output from 4-6 shows per season to at least 8 shows a year as well as one to two touring productions. Richard G. Fallon appoints Asolo veteran actor-directors Robert Strane and Eberle Thomas as Co-Artistic Directors.

1968 - FSU begins sending acting students to complete internships with the company. Howard J. Millman becomes the first Managing Director, a position he holds until 1980. Millman returns to Asolo as Producing Artistic Director in 1995.

1970 - A new touring component is created for younger audiences and continues through the 1990s, producing plays that are seen by hundreds of thousands of students throughout Florida and the Eastern United States.

1973 - FSU's MFA in Acting program comes to Sarasota and the FSU/Asolo Conservatory for Actor Training is born.

1976 - PBS’ “Theatre in America” chooses Asolo Theatre Company as one of only eight companies in the U.S. to be featured on its national television series with a performance of The Patriots by Sidney Kingsley.

1977 - The company once again appears on PBS with End of Summer by S.N. Behrman, starring Helen Hayes.

1981 – This season is the final complete season under the Artistic Leadership of Robert Strane, who has shaped the tenor of Asolo’s creative output for 21 years.

1985 – The leadership team of Ulmer, Fallon, and new Associate Executive Director Stephen Rothman is firing on all cylinders with many sold out performances and the successful New York transfer of Dames at Sea. Despite the popular and critical success of the season (436 performances of 13 plays), the theatre is now operating with over a 2-million-dollar budget and begins to have difficulties meeting its growing financial obligations.

1986 - The Bette Oliver Theatre is created in the Adolph “Chick” Frankel Building for Conservatory and smaller Asolo Theatre productions.

1989 - The company outgrows the Historic Asolo at the Ringling and with the help of the community constructs a new building – the Asolo Center for the Performing Arts. Intent on maintain the connection, at least architecturally, to the best of European-style theatre, the Dunfermline Opera House is purchased from Scotland and reconstructed inside the Center, becoming the Mertz Theatre in honor of its benefactors, Harold E. and Esther M. Mertz. The new building houses not only the 500 seat Mertz, but a smaller second space, room for rehearsal, Conservatory classes, as well as production and administrative offices. The final performance in the company’s historic home is Cyrano de Bergerac and the final curtain is followed by a candlelight procession to the new building on the Ringling grounds. Linda DiGabriele steps into the Managing Director position.

1990 - The company begins performing in the Center and the Mertz Theatre becomes its new mainstage. The first production on the Mertz stage is Lee Blessing’s A Walk in the Woods. This season also marks the transition from John Ulmer to Margaret (Megs) Booker, the lauded founder and Artistic Director of the Intiman Theatre in Seattle.

1991 – In an effort to ensure the long term stability of the company, the new center is acquired by Florida State University and its name is changed to FSU Center for the Performing Arts (CPA).

1994 – Despite boldly theatrical productions such as Svengali (a 91-92 season co-production with Houston’s Alley Theatre) and crowd favorites like Das Barbacu, the theatre is in a financial morass that threatens to close the company entirely. The Jane B. Cook Theatre opens in the FSU CPA and becomes the main performance venue for the Conservatory, and a second stage for Asolo Theatre Company. Its first production, Noel Coward’s Hay Fever, opens on November 17th that year.

1995 - Howard J. Millman returns as Producing Artistic Director and reinstates the resident company and rotating repertory schedule. He also reincorporates the FSU/Asolo Conservatory for Actor Training into the operations of the professional company.

2003 - Centennial celebration for the Dunfermline Opera House, now the Mertz Theatre, which opened its doors in Scotland in 1903.

2007 - A Tale of Two Cities enjoys its world premiere and a sold-out run in the Mertz Theatre. The show will later transfer to Broadway. Asolo Rep gives its first guest theatrical performance in the Ringling's Historic Asolo Theater, Nobody Don’t Like Yogi.

2008 - Drama Desk and Tony Award®-winner Stephen Schwartz works with Asolo Rep to re-imagine an updated production of Working, with new songs by Tony Award-winner Lin-Manuel Miranda. Barnum, produced by Asolo Rep in co-production with Maltz Jupiter Theatre, and starring Brad Oscar, enjoys a sold-out run and goes on to win multiple Carbonell Awards. In the Historic Asolo Theater, Asolo Rep produces the American premiere of The Blonde, the Brunette, and the Vengeful Redhead by Robert Hewett.

Asolo Rep purchases 10 condos for use as artist housing.

2009 - With major gifts from Beverly Koski and others, Asolo Rep purchases a warehouse property at 1009 Tallevast Road, which will become the Robert and Beverly Koski Production Center—including The Joan Armour Mendell Scenic Studio and the Ted Weiller Rehearsal Hall—dedicated in 2014. Asolo Rep presents another notable world premiere with Jason Wells' award-winning production of Perfect Mendacity. Contact is produced in a landmark partnership with the Sarasota Ballet. Asolo Rep’s production of The Life of Galileo garners national attention and an outstanding review by the Wall Street Journal’s Terry Teachout.

After Board Member Warren Coville leads an effort to “Burn the Mortgage” on Asolo Rep’s Serenata condos, the Margot and Warren Coville Guest Artist Housing is dedicated.

2012 - Asolo Rep is awarded WEDU's seventh annual BE MORE Arts & Culture Award, honoring Tampa Bay area non-profit organizations. Asolo Rep earns recognition with this award for contribution to the spirit of adventure and exploration through education in the arts, and bringing rich and engaging experiences to audiences.

Once in a Lifetime, directed by Mark Rucker, receives national attention from a
rave review by the Wall Street Journal’s Terry Teachout.

Asolo Rep’s production of Yentl and its music composer Jill Sobule are featured on
NPR’s “All Things Considered: Weekend Edition.” The national broadcast featured original music from the show.

Asolo Rep purchases property adjacent to its current Tallevast Road facility with a major gift from Beverly Koski, to fulfill the vision of The Koski Production Center Campus.

2018 - The 2018/19 season at Asolo Rep celebrates 60 years on stage. The Herman and Sharon Frankel Asolo Rep Annex is dedicated.

2019 - Josh Rhodes returns to Asolo Rep for a boldly re-imagined The Sound of Music and Ken Ludwig’s Murder on the Orient Express is one of the most popular plays ever produced on the Mertz stage.

2020 - The Ground Floor, Asolo Rep’s initiative to nurture new works and new artists, opens the doors of its newly refurbished rehearsal-hall-turned-performance-space with its first official reading.

Due to the onset of the global pandemic, Asolo Rep takes the unprecedented step of closing its doors mid-season, cancelling over 200 performances. With a pivot to online programs and the generous support of the community, charitable foundations, and government aid Asolo Rep weathers the storm. Programs like Ground Floor: Making Musicals, the Engage on Air podcast, and Monday Musical Moments help keep audiences connected while they are not able to gather.

2021 - With indoor performances impossible due to the pandemic, Asolo Rep creates the Terrace Stage, a brand new, outdoor venue on the steps of the FSU Center for Performing Arts. Asolo Rep will go on to be one of only a very few LORT theatres able to produce at all this year, ultimately producing 5 shows on the Terrace Stage, including launching the rolling world premiere of Cheryl L. West’s Fannie: The Music and Life of Fannie Lou Hamer, a one woman show with music starring E. Faye Butler.

Asolo Rep breaks ground on the expansion of the Koski Center which will include new rehearsal spaces to allow for larger productions, badly needed education and community engagement facilities, and state of the art costume shop with storage.